Once again it is Wednesday and time for a Hump Day Hook! I’m stepping away from Ark for a bit (Luk has chosen to be rather quiet lately), so today’s hook is the opening to another WIP, titled Subeo, which is Latin for ‘I submit.’ (Ironically, this too involves a door…)

The snap of ammonia assaulted his nose.

Waking, he struggled to orient himself. Where the fuck am I? Last he knew he was at the coffee shop across from campus. Now darkness pressed against his senses, filling his vision, stopping his ears. He shivered. 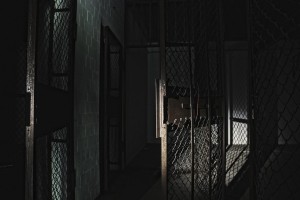 He lay on what felt to be a narrow cot, its frame digging into his shoulders. Carefully he reached out his left hand and encountered a rough, cold wall. Cinderblock. To the right his other hand found empty air. Rolling to that side, he cautiously sat up. The cot creaked loudly in the heavy silence.

Standing, he swayed a little and steadied himself with a hand on the wall. Trailing fingers along the bricks, he shuffled forward, his right arm extended. A few steps brought him to a corner; turning right, he continued his tour. Another corner.

“Ouch!” Table. He sidled around the obstruction, keeping his hand on the wall. The table stood next to a door.

Sweeping hands over the surface of the door, he found no window, no lock, no knob, only an expanse of cool metal.

“Hello!” His fists drummed on the door; hollow echoes followed. “Anyone there? Let me out!”

The darkness absorbed his shouts, muffling his cries for help. He kept pounding, kept hoping for a response. Only the silence screamed back.