Greetings, all! It’s hump day and time for some hooking!

We are rejoining Liam in Subeo today. For a refresher or to catch up, click here.

Liam strained to listen to the darkness.

He pricked his ears and held his breath, trying desperately to discern some sound beyond his cell. The silence weighed against him, sitting thickly and pressing on his ears. His heart marked time. Lub-dub, lub-dub.

His anger at Keith had drained away, leaving a diffuse worry made worse by the whine of Keith’s voice, so unlike its typical warm baritone. Clearly, the grad student was stressed, which would seem to indicate that he wasn’t in charge.

Liam wished something—anything—would happen. He was tired of being in the dark—literally.

“Liam Sean Fitzpatrick, you have been chosen.”

Liam started. The voice was different, not so harsh, with a trace of an accent. English? Scotch?

He knew better than to talk back. 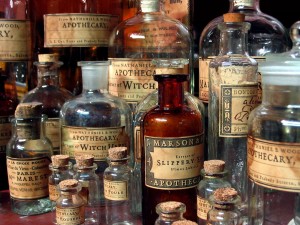 A decision is required.”

A light snapped on, illuminating the table with a dim, red glow. Two bottles stood there—one tall and slender, the other short and squat.

“Drink one to move forward and gain knowledge. Drink the other to move backward and remain secure.”

With a silent groan, Liam stood up and approached the table.