Yes, I have been absent recently–no good excuse other than lots of stuff going on!

It’s time for another visit to Christos and James in The Greek Room. For a refresher, click here.

James set the tiny valise at the foot of the enormous bed. “This is the best bed in this wing.” He brushed at the counterpane. “Care to give it a tumble?” 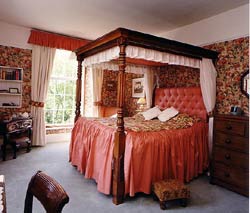 The Englishman took his hat from his hand and tossed it onto a table. “I asked if you’d… like… to fuck.” James’ hands settled on his shoulders, neither pushing nor pulling. This close to the servant, Christos realized a spicy scent, like cloves or cinnamon, hung about him.

Be sure to check out the rest of the Studs and Sirens here.