Greetings, all! It’s Saturday and time for some more Seductive Studs!

Today we rejoin Christos in The Greek Room. To catch up, click here.

The footman grabbed the letter from Christos’ hand. His lips moved as he read the address. The Honourable Robert Evans, Dunbarton Hall, Corbridge, Northumberland. Duty warred with distaste across the footman’s well-proportioned face. “Wait here,” he mumbled. He turned on his heel and disappeared into the depths of the house, straightening his hair and coat as he went.

Anxiety returned, roiling Christos’ gut. It was a mistake to have let the letter out of his sight. It was all he had—the only thing left from his father. But it was too late to call the footman back. He could only believe in his father’s conviction, in his trust of this man Robert Evans. To distract himself Christos wandered about the entry hall. 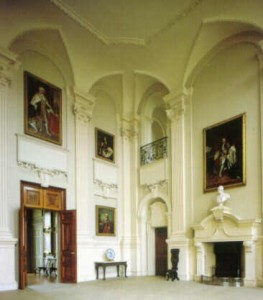 The foyer was immense. Dominated by a gigantic chandelier, the circular space was larger—and more richly appointed—than any place Christos had ever seen, even in Athens. Enormous oil paintings showed a variety of men and women in all manners of dress, some standing, looking stiffly posed; others astride horses or holding dogs; a few depicted children seeming stuffy and over-dressed. Every surface he examined gleamed with polished marble or gold or silver. The clack of boot heels returned, and Christos scuttled back to his appointed place near the door.

He took the opportunity to examine the young servant. Tall, dark-haired with broad shoulders and a trim waist, he was quite attractive, now that his face wasn’t distorted. Smooth skin and a fine straight nose made Christos curious about tasting the footman’s full lips.

“The Earl will receive you.” Clearly the young man thought his master had gone totally potty to see this stranger who had appeared out of the morning mist. “Follow me.”

Be sure to read about more Studs & Sirens here.

While you’re here, check out When Sparks Fly for a chance to win free stuff!