It’s Saturday and time for some Seductive Studs! (Yes, I know, I’ve been AWOL for a few weeks.)

I’m returning to Summer of History, where we rejoin Ryan and Scott in flagrante delicto: 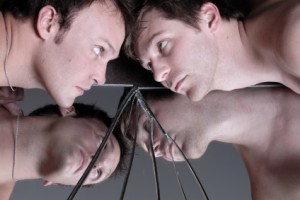 Ryan ran his teeth along Scott’s jaw to nibble at the soft skin beneath his ear. Scott grunted, deep in his throat. Ryan knew exactly where to tease him. As Ryan’s fingers massaged Scott’s muscular back, his mouth continued south over the hollow of the painter’s collarbone and across his chest to seize a nipple in its teeth.

As Ryan chewed and licked at the nub of flesh, Scott’s thrusts accelerated and his breath came in labored pants, gusting across Ryan’s shoulder. Scott pumped harder, driving his cock deeper into Ryan, who moaned as his nuts tightened, orgasm coiling in his groin.

“Shit,” whispered Scott. “That was some good make-up sex.”

“Yeah, like everything’s all better now.” With that Ryan got out of bed and walked to the bathroom.

Thanks for reading! Be sure to check out more of the Studs here.