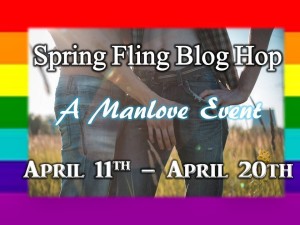 It’s time for a second post for the Spring Fling Blog Hop!

Our first order of business is a surprise drawing!

Busting the Greenhorn or Side Effects

And that winner is…. Laura!

(To collect your prize, just reply to my email.)

I’m giving away more stuff, so following today’s excerpt, there is another opportunity…

This excerpt is from my soon to be released historical novelette, The Greek Room. TGR follows Christos, a recent Greek emigre, as he navigates his new life in an English nobleman’s household:

The suite of rooms was larger than their entire house in Arpos. A sitting room furnished in heavy chintz pieces connected to a bedroom dominated by a four-poster bed; there was even an adjoining bathroom, gleaming with white tile. James set the tiny valise at the foot of the enormous bed. “This is the best bed in this wing.” He brushed at the counterpane. “Care to give it a tumble?”

Gripping James by the neck, Christos captured those full lips and drove the Englishman backwards towards the bed. Before he had even rumpled the counterpane, James had undone his tie, ripped open his shirt and was pushing Christos’ coat off his shoulders. The Greek youth released his companion just long enough to fling the jacket away and scramble out of his own clothing. James used the respite to shrug out of his braces and kick his trousers aside before lying back on his elbows across the bed and massaging his rising erection. “Oi, mate! You’re bloody fuckin’ gorgeous.”

Be sure to visit and participate on all the stops for lots of chances to win!

*Also, don’t miss out on the Rafflecopter drawing: