It’s Saturday, which means it’s time for some Seductive Studs and Sirens! I’m doing another clip from Double Team; so to catch up, click here. We join the guys as they leave the Student Union:

We made short work of the trip to Joey’s dorm. Malcom Hall was an original Grandville building and sat just across the Quad opposite the Student Union. The room was more than large enough for Joey and his two roommates. He explained it had actually been meant as a four-man space, but due to an odd pipe intrusion, the square footage only allowed for three occupants—and they had made the most of it.

Joey’s engineering skills were clearly on display with the cantilevered bunk beds that occupied one wall, leaving the bulk of the space for recreational purposes. The largest TV I had ever seen faced two sofas and a futon mattress strewn with floor pillows. The “mosh pit” Joey called it. A DVD player, stereo and several gaming consoles completed the audio-visual set up.

Noah whistled. “How do you guys study?”

Scalzotti chuckled. “That’s what the library’s for.”

Next to the futon stood a small refrigerator, out of which he grabbed several cans and handed around the beers.

“Don’t worry, Rufus, it’s low-carb.” He trailed his beer can along the exposed skin below the hem of the footballer’s shirt.

‘You look like you could use some cooling off.” Joey’s hand drifted lower to graze along the large bulge in Rufus’ shorts. My own cock was getting hard just watching.

“I don’t think I want to cool off just yet.” Rufus placed a hand on Joey’s neck and pulled him closer. Their faces stopped just short of each other. Joey’s hand came to rest on Rufus’ chest; his other continued to hold his beer, forgotten.

Time again for some Seductive Studs and Sirens! However, this weekend I’m stepping away from Radiq—just for today, so don’t worry.

Why? you ask. Because Those Grandville Guys is now available in paperback!

So, to have a bit of an exhibition for this event, today’s clip is from Double Team, which makes its début in this volume. Another clip is available here. We join Jerry (our narrator) and his boyfriend, Noah, as they share a late-night snack with their friends, Rufus and Joey.

Joey nodded toward the other side of the table. I followed his eye line and watched as Rufus stretched and casually laid a formidable forearm along the back of my boyfriend’s chair.

“You guys should come over to my room!” Joey blurted.

“What are you doing?” I whispered to Joey through gritted teeth.

“Just follow my lead,” he mumbled back. Then, louder, “Josiah’s dad bought him a sweet 60-inch plasma TV. He’s getting divorced—his dad, not Josie—and needed to ameliorate Josie’s grief at the loss of step-mom number three … or is it four? But he’s got his own way of grieving—he’s chasing a little Tri Delt he met last weekend. Macon’s gone for the weekend as well, so I’m all alone.” He pouted, looking disturbingly like Debbie Mazar with stubble. “Whatya say? The fridge is stocked, and I’ve got a couple of new DVDs for … uhm …. entertainment.”

Noah swallowed a bite of his sandwich. “Sure! Sounds fun!”

I gaped at Noah; despite his nerdy exterior, there was an adventurer underneath. I liked that more and more. “I’m good, too.”

Joey held up a finger. “Don’t give me that ‘my body’s a temple’ crap! Your temple’s had more visitors than the Acropolis!”

Rufus slapped the table top, making the service ware jump. “Damn, Joey, you come up with the best lines!” He leaned back in his chair. “I’m in.”

Be sure to checkout the other Seductive Studs and Sirens:

Getting the year off to a start has been a bit of a challenge, but things are looking good! Just released is my newest collection, Those Grandville Guys, which brings together all the current Grandville stories and adds two new ones to the mix.

Today’s clip is from one of those new stories, Double Team. We first met Jerry and Noah as Noah told their story, The Pickup Game, and we now hear from Jerry, as he and Noah explore a new dimension of their developing relationship:

My trigonometry assignment was turning into Swahili, and I was two degrees from banging my head on the desk in frustration when Noah came crashing into our dorm room. His backpack and text books flew across the space, thumping loudly against the wall.

“That damn Rufus Sherman is at it again!”

“What has your not-so-secret admirer done this time?” I struggled to keep from grinning. Noah is just so cute when he’s angry. 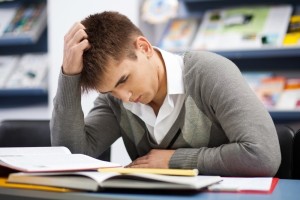 “I’m in the library, studying for my Differential Equations exam, and Sherman sits down across from me.”

“So? There are worse things to look at.” Tall, dark, handsome—and able to be outsmarted by a bag of gravel—Rufus Sherman was the archetype of the dumb jock and, admittedly, the last person I’d expect to be showing up in the library.

“So?” Noah’s voice slid up a full octave. “He started rubbing his foot on my leg, making straight for my crotch!”

Ever since he’d met Noah at a fraternity party, Rufus had had a total crush on him. I choked back a snicker.

I tried my best to look stern. “What did you do?”

“I moved, of course.” Noah sat on his side of our beds. “Then he followed me.”

“Did you talk to him?” I knew that Rufus was harmless—although an outrageous flirt, he was a total bottom, who’d exploded out of the closet when he arrived at Grandville.

“Playing hard-to-get will only egg him on,” I warned.

“I’m not playing hard to get!”

I had to indulge my inner theater queen: “Methinks the lady doth protest too much.”

“Don’t quote Shakespeare at me!” Melodramatically, Noah flopped back against the pillows, flinging an arm across his face. “Why did you guys have to pledge him?”

“Well…” I considered the possible ramifications of my next words. They could leave me hanging from a really flimsy limb. Ah, fuck it, I thought. “Then say, ‘Yes.'”

Thanks for reading! Be sure to check out the other Seductive Studs and Sirens here.

To pick up a copy of Those Grandville Guys, visit one of these retailers: