Hey, everybody! Let’s get the weekend started with a Sexy Saturday snippet!

Since this week’s theme is “My Sexy Vacation” I chose to do a clip from my novella, Busting the Greenhorn. Jake is on vacation at a resort along the Russian River, when he garners the attention of one of the locals while sunbathing:

Silence fell, leaving only the murmuring of the river as it babbled over rocks and roots. The birds had stopped their chirping in the trees, and Jake heard rustling in the thick foliage along the watercourse. Tales of bears and other wild animals crossed his mind. He sat up and gave some thought to packing and leaving. The rustling grew louder; Jake heard actual snapping of branches. A dark figure moved out from the undergrowth; someone on a large horse trotted out of the bushes onto the sandy margin. In the gold afternoon sunlight the figure resolved into a man in a black Stetson. Seated atop a black stallion, he appeared to have ridden straight out of an old Zane Grey western. A faded blue chambray shirt and jeans completed the likeness. He reined in the horse and waved to Jake. “Howdy!  Did you happen to see a golden retriever pass this way?” Removing his hat to wipe his forehead, he flashed a big white smile framed by a thick black mustache. The deepest blue eyes Jake had ever encountered sparkled in a handsome, tan face. The rider’s eyes held the writer’s gaze hostage with their intensity.

“N . . . no, no I haven’t,” Jake stammered out after a few seconds. He didn’t seem to be able to get his tongue to work right. He was trying not to stare but wasn’t having much luck—he couldn’t look away from the horseman.

“Didn’t mean to interrupt your vacation, but my dog ran off.” The baritone richness of his smooth voice played counterpoint to the alto burbling of the nearby water. The man replaced the hat, adjusting its position. “He knows the way back to the ranch, though. If he sees you, he’ll probably come over to say hi.”

Jake swallowed past a lump in his throat, wishing the cowboy would come over. “If I do see him, I’ll tell him to go home. Good luck finding him.”

The horseman touched the brim of the Stetson. “Thanks, I appreciate it!  See you ‘round.” He set his spurs to the horse and wheeled about to disappear back into the brush.

Jake fell back on the towel; his heartbeat thudded in his ears, galloping away of its own accord. For too long he’d been among starchy, corporate types and pale, technophile geeks; the horseman’s sheer, raw masculinity set his heart racing. The rancher had worn his shirt open; every time he had moved, the hairy cleft between his chest muscles had rippled, and Jake wanted to explore that valley. The horseman’s wind-burned face had been open and honest with deep-hewn laugh lines embracing his mouth. Lizard-skin boots and black, denim jeans spoke of a working man, not some weekend cowboy. He’d sat the horse comfortably, clearly in command of the large animal.

Yawning, Jake stretched and decided to go take a nap until cocktail time. There wasn’t any point becoming a lobster on his first day. As he climbed the bank to his cabin, he turned and glanced down to the riverside. Briefly he saw a black horse and rider moving back into the trees. Had his cowboy come back for another look? Jake hoped so.

Please leave a comment and then check out the other Saturday contributors: 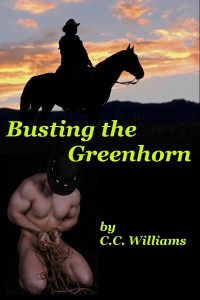 To pick up your own copy of Busting the Greenhorn, follow one of these links—

For today’s snippet I’ve chosen a little bit from my historical piece, The Greek Room.

The Earl’s manservant is just showing Christos to his new living quarters:

The suite of rooms was larger than his father’s entire house in Arpos. A sitting room furnished in heavy chintz pieces connected to a bedroom dominated by a four-poster bed; there was even an adjoining bathroom, gleaming with white tile. James set the tiny valise at the foot of the enormous bed. “This is the best bed in this wing.” He brushed at the counterpane. “Care to give it a tumble?”

Christos’ thoughts spun. Never had anyone approached him so brashly. He was adept at the dance of secret glances and small gestures that was the way of the tavernas; but to have a man—particularly one as handsome as James—offer sex directly sent him into a spiral. Fear and surprise struggled with a desire that had smoldered since he entered the manor house. Lust won.

Please leave a comment before visiting the other pages.

For MSS this week, it’s moving day for Max and Damien from my novella Side Effects:

Damien entered from the bedroom. “I’ve ordered the pizza, so you’re going to get paid. There’s soda in the fridge if you want some.” Jerry and Noah whooped and headed for the kitchen, hand in hand.

“It’s like they’re attached to each other.” He turned to me, wiping at something on my nose. “You’re dusty.”

I gave him a peck on the cheek. “You’re not so put together yourself.”

He struck a pose worthy of any GQ hunk. “I am the very picture of sartorial perfection.”

“For the long-term homeless maybe.” I brushed cobwebs out of his hair.

Damien grabbed my hand, wrapping me close in his arms. “Well, I’m not homeless now.”

I looked into those eyes—one green, one sexy hazel—and couldn’t imagine being here with anyone else. Our lips met.

Thanks for stopping by! Please leave a comment before checking out the rest of the group!

For MSS this week I decided to take a walk down memory lane with one of my favorite stories, Giant Killer. This short is my re-telling of the biblical story of Jonathan and David (with a walk on by Goliath):

David lifted the pitcher, glad for the clean scent that cut through the coppery tang from the gore-sodden tunic at his feet. Water sloshed out of the basin as his hand shook. Wetting a rag, he began to wipe dully at the brownish stains on his hands and arms.

Unexpectedly Jonathan was there, taking charge of the cloth. Deep furrows split his forehead as he considered David. Softly, he began to wipe the dried blood from David’s face. “You were very brave.”

David wanted to look into those hazel eyes forever. He raised a hand to Jonathan’s brow, seeking to smooth away the worry lines. “I did it so you wouldn’t have to.” Some mix of thoughts and emotions played across Jonathan’s face.

Jonathan ran a knuckle along his jaw, and a cool fire burned his skin in the wake of that touch. Then Jonathan’s mouth was on his, and David drowned in the flavors of honey and wine and the cloves that Jonathan loved to chew. Lush and insistent, their tongues met and played, tasting each other’s passion.

David wrapped his arms around Jonathan, willing himself closer still to the soldier. His hands roamed, exploring the expanse of firm, muscular frame. Jonathan’s hands, rough and callused, gently cradled his head as their mouths continued to duel. Suddenly Jonathan swept him up, lifting him clear of the floor, and laid him unto the larger bed.

He remembered he was naked, still speckled with blood. “Jonathan—”

“Shhh, be calm!” The soldier poured fresh water and continued to bathe him, gently wiping away the day’s horror. Once David lay clean and fresh, Jonathan pulled off his own tunic to stand boldly, yet somehow reserved, at the bed side. 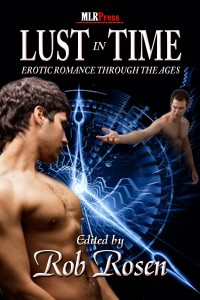 Giant Killer appears as 1000 B.C. in the ManLoveRomance Press collection, Lust in Time, edited by the wonderful Rob Rosen.

Thanks for stopping by and please leave a comment!

I’ve stopped by MSS from time to time, but haven’t joined in until now! MSS is where writers post 7 words, 7 sentences, or 7 paragraphs from a work in progress or published work.

I’m sharing a clip from Ark, a dystopian sci-fi piece where genetic engineering has removed the need for biological procreation, and sex—of any kind—is illegal.

Luk heard a soft knock on his door and got out of bed to look out into the hall.

“May I come in?” Ivan whispered.

He was naked, and the sight of that hard body made Luk’s heart pound painfully against his ribs.

Ivan slipped past him into the cubicle, and before Luk realized it, Ivan wrapped his arms around him.

“Hold me,” Ivan sighed, his strong hands rubbing against Luk’s bare back. Luk tried to resist, but the urge for contact was too strong.

Warm and silky, Ivan’s skin stretched over shifting muscles that knotted up into rocks beneath Luk’s fingers. His hot breath and soft lips against Luk’s neck soon broke down any resistance, and nothing mattered but to feel Ivan’s heart beating against his chest.

Please leave a comment, before checking out the rest of today’s participants.