If you’re a first-time visitor, thanks for coming! If you’re a regular, welcome back!

Given the hop’s title, I naturally thought about water when it came to picking a topic. But just plain water wouldn’t do, so something water-related… and sexy… seemed more in order. That, of course, led me to deciding to present an excerpt from Coxswain All The Way which appears in my most recent collection Sophomore Season. Now I couldn’t do a post with just an excerpt and some promo…

So, since Coxswain All The Way is about rowing and there’s nothing sexier than rowers—except naked rowers—I have to give a shout out to the Warwick University Boat Club‘s (UK) senior men, who for the fourth year are presenting their Naked Rowers Calendar! 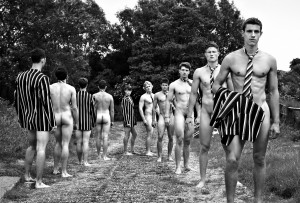 Click the photo to visit their shop for calendars, photos, even video! Proceeds benefit not only the Boat Club, but also go towards fighting bullying and homophobia! And for those that like some naked girls, the Women’s team has done their own this year as well.

Now for a clip from Coxswain All The Way:

Derek just happened to be riding through Kentucky in the passenger seat of Kevin Patterson’s stripped-down van with seven hunky guys sleeping behind him. With only two seats in the van—one for the driver and another for a passenger, the team took turns in them. At night, since they were driving nonstop, the navigator’s job was to keep himself and the driver awake.

Derek felt lucky not only to be part of an outstanding team but also to be sitting next to Mac, talking about everything and nothing while the rest of the boat slept. MacIntyre Davidson Holbrook was a sight to behold. At six feet three and 210 pounds with short blond hair in tight small curls, he would give Adonis a run for his money—blue-green eyes and little hair on his body only added to his advantages. His chest looked shaved—all the better probably to show off his awesome definition. Since they weren’t in the same dorm, Derek had only seen him in the showers after a couple of regattas. If his lax uncut dick was any indicator, he had a hefty piece between his legs.

Still early spring, the weather cooled off at night; with heading south the rowers anticipated the warmer climate, and their clothes had changed accordingly. Mac wore cut-off sweats, a D&G tee-shirt with the sides ripped out and his ever-present Vans. Since Mac sat twenty feet away from Derek in the “engine room” (the four seats in the middle of the 60-foot-long boat), the coxswain hadn’t developed as close a relationship with the rower as he had with Jake, the crew’s stroke, who sat only two feet or so in front of him. In fact, he and Mac had seldom talked about anything but crew. The night wore on, and they grew more comfortable with more than just small talk. The conversation moved from general banter to deeper but still impersonal things to more personal topics.

It was inevitable they’d eventually talk about sex.

The conversation began as a detached, almost academic, discussion. When they did get more specific, Mac used the word person, as in “I was really attracted to this person” rather than “I was really attracted to this girl.” This peculiar usage piqued Derek’s interest—he often said the same thing. He wondered if Mac’s motivation was the same as his.

I have to find out. But how?

The conversation lulled, and Derek steered the topics back to high school sports. After hearing about Mac’s prowess as a wrestler, Derek related his accomplishments in swimming and water polo.

With his bona fides established, he told Mac how he’d always admired wrestlers, especially their muscle mass. “It’s like those statues the Greeks and Michelangelo made. God, I wish I could develop a body like that!”

“There’s nothing wrong with your body.” Mac noted, “You’ve just gotta realize most of it’s genetic. You’ve got that lean, muscular swimmer’s build most people would kill for.”

Heat crawled up Derek’s neck, and he opened his window a bit. “Thanks.” Emboldened by Mac’s level-headed response, he decided to go out on a limb. “One of my motives for getting involved with crew was—“Uncertainty stuck in his throat as he nudged closer to the edge, and he coughed. “Was to be able to admire—at close range—such specimens of male anatomy, like…” Then he jumped off, “Like you.”

Mac had been animated up until then, but now he stared at the oncoming road, silent and pensive.

Derek’s pulse pounded in his head. Did I blow it?

He stared straight ahead as well, watching the white lines run through the headlights and under the van. “Sorry if I offended you, Mac. I hope you don’t think…” Derek struggled to find the words to argue—convincingly—he wasn’t queer. Quickly he glanced at Mac.

Lit by the green instrument lights, the rower’s handsome profile pulled at something in Derek’s chest. Facing forward, Derek peripherally saw Mac’s hand creep toward his crotch. He risked another peek at him. For an instant their eyes met before Mac’s hand quickly returned to the wheel, leaving behind a tent in his sweats!

That was the green light Derek had been hoping for.

Unbuckling his seat belt, Derek shifted to face Mac, who when he heard the click looked over, his eyes wide and fearful. The rest of the boat slept on the floor behind them. Mac glanced at the rear-view mirror, terror at being discovered quivering along every lovely muscle.

“Take it easy, Mac,” Derek whispered. “They’re all asleep. You know we both want the same thing. I think you’re one of the hottest guys I’ve ever seen and just want to make you feel good and have some fun at the same time.”

Squirming around, Derek knelt on the floor and reached across the engine cover toward his prize. Before grabbing it though, he decided to check out the rest of Mac. He stretched a hand into the loose top and ran his palm over Mac’s stomach. Silken skin covered the rower’s washboard abs. His fingers scaled that magnificent torso, eventually reaching his pecs. With an elbow resting against Mac’s cock, Derek’s fingers traced the sharp definition between his firm pecs and his abs. Mac inhaled sharply but maintained control of the van. On their pass across his chest, the wandering fingers touched his left nipple. He exhaled with a sigh. Small and hard, the nub was quite sensitive. A tentative index finger caressed the hard flesh, and the lump pressing against Derek’s elbow twitched and grew even larger.

After playing with the more accessible of Mac’s nipples, Derek ran my fingers down the valley between those pecs and, farther down, along his abs. Derek had to touch those chest muscles again. He reached up and placed his whole hand over Mac’s right pec, the nipple jabbing the middle of his palm. Hand pressed hard against the muscle, he rubbed in a slow, firm, swirling motion. With each circle he released a bit of the pressure until the palm barely grazed Mac’s aroused nipple.

Mac struggled to keep from jabbing the accelerator to the floor. He groaned, producing quiet little sounds of pleasure. Looking up at his chiseled features, illuminated by the faint dashboard lights, Derek trailed his hand down to Mac’s belly. The rower whispered, “My dick, dude, my dick. Take it out.”

Not one to wait for a second invitation, Derek pulled the drawstring on the sweats and untied them. That done, Mac used his free hand to pull his tee-shirt up over his head, baring his torso from throat to pubes. He raised himself off the seat a bit so Derek could pull down his pants for better access to an amazingly fat and long joystick. Nested in downy blond hair, Mac’s cock was a sight to behold. Derek gasped. Just looking at it, arched against that perfect stomach, was orgasm inducing.

To enter the Giveaways, leave a comment below and let us know how you like to get wet!

A randomly selected comment will receive an e-format version of Sophomore Season. All comments with email addresses will be entered in the drawing. Leaving a comment also gets you an entry toward the Grand Prize—the hopper with the most entries from all sites on the Hop will receive a $50 Amazon gift card!

Stop next door for some Seductive Studs and then check out the other Slippery Bloggers: